Uni-apical osteotomy. While there is an overall alignment between hip, knee, and ankle (red line), there is a 12 degree angular deformity of the tibia (blue line). A single osteotomy near the ankle and elevation of 12 degrees realigns the tibia. The knee and ankle are in normal orientation. The axis of the tibia is zigzagged (green line). 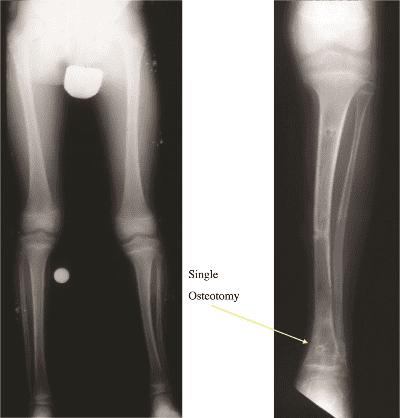 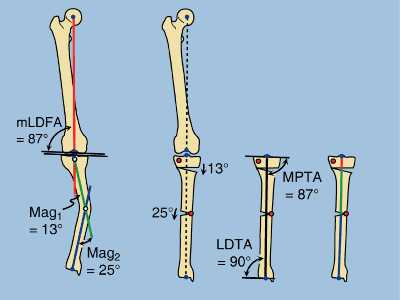 Bi-apical osteotomy. The line between the hip and the knee does not pass through the ankle (red line). There are two different centers of rotation of angulation (CORA) at the tibia. One is 13 degrees (green line) and the other is 25 degrees (blue line). Two osteotomies are performed and the knee and ankle joint orientations are returned to normal. The red, green, and blue lines are all one axis. The anatomic axis of the tibia is straight and completely aligned. 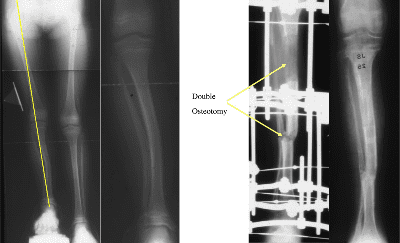 Limb lengthening requires careful consideration of the joint contractures and a deep understanding of the condition. Without the requisite knowledge, lengthening can result in a worse result, including degeneration of the affected joints. It is therefore extremely important to have a good understanding of the complexity of this condition and to address all of its components, including: