Mara was born as a very healthy baby, and it was a big surprise when during her 5-month revision, the pediatrician told us she had noticed a weird bend of her right leg and that a traumatologist should check it up. A week later and after x-rays were taken a sort of nightmare started for us, we learned that Mara had congenital pseudoarthrosis of the tibia (CPT), an extremely rare disease and with one of the worst prognosis in traumatology. We were told that her leg was going to deteriorate to the point of breaking, that she will then need surgery and that in any case was it going to be definitive, the leg would most likely break again… and again and again. With our baby in our arms we had to hear them talking about a childhood filled with limitations, lots of surgical treatments and a more than possible eventual amputation. 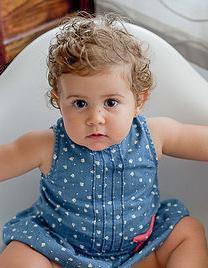 In the sleepless nights that followed this diagnosis my husband found a webpage in the internet about Dr. Paley, an American surgeon who claimed to have found a 100% success treatment for CPT. We desperately hoped that it was true, but you know how things are these days with the internet and people claiming to be able to cure all kinds of things…

I am actually a scientist, so after finding about the Paley Institute we started our own investigation to decide if we could trust them with our precious daughter’s treatment. We contacted every MD and traumatologist we or our family and friends had ever met and asked all of them if they had ever heard about Dr. Paley. Let me tell you, the response we got was absolutely overwhelming: he is a star, medically and personally, there is no better place your daughter could be.

Now it’s been around a year all that happened. We contacted Dr. Paley and he responded within the hour, as he’s always done since then every time we’ve had a question. We arranged surgery for our daughter in August although her bone never did break. Actually, it was great that she never underwent the trauma and associated secondary complications of it breaking, instead Dr. Paley and his team cut and corrected her bone in the OR under controlled conditions. As a result, Mara is now walking perfectly and freely, just wearing a small brace on her leg for protection, but with no limitations whatsoever in the activities she takes a part on.

We still have a lifetime of worrying because we are her parents and that is our job, but the expectation is that Mara will continue to walk, run, jump and dance completely normally as she grows up. So, it took a trip to Florida and a few scars, but we are awake and the nightmare is over, and it’s all thanks to Dr. Paley and his amazing team who for sure changed Mara’s life.