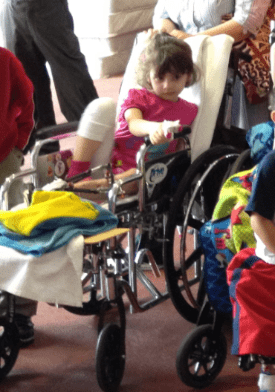 What I write for you is not consent, it is a letter of introduction to the great men that have great efforts to serve humanity and bring hope to the lives of disabled people.

I am Shahram from Iran. My second daughter was born in third of January 2008, with congenital anomalies, Fibular Hemimelia, and the third day after birth I took Nazanin for an examination and consultation to orthopedic specialist in our hometown (Urmia). At the first examination, one of the doctors said the only remedy is amputation. I returned home with great sadness, but I did not disappoint. Then we went to Tehran and during 9 months we consulted about 27 orthopedic specialists and subspecialists. Most of them offered amputation, some of them said we cannot work currently, after 4 years let’s see what can be done.

Until a young orthopedic doctor, Mr. Motalebizadeh, said I can solve the problem. Nazanin from 9 months to 29 months was treated. After five surgeries she endured great pain, severe infections and much travel to Tehran. Practically none of her foot deformities were resolved.

I tried a lot to find a treatment outside the country until I met Dr. Paley through the Internet in winter 2011. He announced readiness to treat Nazanin’s foot immediately, after reviews of x-rays. High cost of treatment, her treatment was impossible for us, until Dr. Paley and Mrs. Garner returned smiles and hope to our life by eliminating 70% of the cost and the remaining costs paid by Child Foundation Charity.

After a very difficult process of obtaining a visa, on January 26, 2012 Nazanin was operated by her doctor's surgical team for 9 hours.

The behavior of Dr. Paley and staff of his institution was very good and enjoyable, the attitudes and behaviors that in our country will never be experienced. During the surgery, a kind lady named Candice informed us of her status regularly, and after the end of surgery, despite the exhaustion, Dr. Paley came forward to us and explained what had been done and the result is satisfactory.

After surgery at Children's Hospital, Nazanin was hospitalized for 5 days. Care doctors and nurses at Children's Hospital of St. Mary’s were very accurate, and their behavior was very good and full of kindness. After her release from the hospital physical therapy of Nazanin began immediately, and it was continued for 73 days. I have to thank her therapist, Carolina, because she worked with great care and high expertise so that her behavior was like a second mother to my daughter. Her efforts were very helpful and Nazanin’s recovery was very quick.

After the end of lengthening schedule, we returned to our country and after 3 month break then we came back to America again on August 9. On 29 August of 2012, Dr. Paley, during a 2 hour surgery, separated her fixator and 8 plates, and her leg was cast. After 2 months of her cast, it was opened. I will never forget it when they opened the plaster we saw a healthy and beautiful leg that had no resemblance to the previous leg. Carolina worked on my daughter’s leg for 1 month again, and now we are in Iran. Nazanin can play with her friends, such healthy children and like them runs, skips, and she is very happy. We owe all of these to a great man and a gentleman, Dr. Paley. Here it is necessary to appreciate all of personals and management of St. Mary's Hospital and Dr. Paley’s institution and Child Foundation Charity such as: Mrs. Toni Garner Servando, John, Caroline, Ali, Candice, Anthony, Feran, Tom, Stella, and other friends I sincerely thank.

Dr. Paley and friends: Nazanin embraces her leg every day and says: “I love my new leg!”